I fell in love with canines the very first day my grandmother brought home a pure breed German Shepherd puppy.Til this day I still remember. It was thirty years ago. And I was six or seven years old.

The first moment I laid eyes on the male pup I was excited and happy. I named the puppy Brownie because of his pretty brown colored coat. I brought him straight up to my bedroom and sat him down onto the floor. He was so cute and little and he pooped right in the middle of the bedroom floor. After that Brownie and I were inseparable.

The puppy and I instantly became attached to one another. I fed him, walked him, played with him, and I had him doing tricks.

I taught Brownie how to jump through my hula hoop and I learned just how intelligent and talented my baby shepherd was.

Weeks went by and I watched how Brownie began to constantly grow and develop. I learned a lot from observing my pet’s behavior.

My grandmother had brought the animal into our home because she had intended for it to grow up to become an attack dog. So she didn’t approve of the way that I was raising Brownie. I gave him care, love and affection. And I was teaching him how to instinctively respond to people and the things going on around him.

My grandmother wanted Brownie to stay chained up outside in our backyard all day and night without any communication from others so that he would turn out to be mean and vicious and protect the home.

In my opinion, my grandmother had a few “screws loose”. I don’t feel that one has to mistreat or neglect a dog in order for it to learn to protect you. If you give them good care they will naturally love and protect you.

I refused to give in to what I considered to be absurd. I explained to my grandmother that I felt her way was wrong. And that I would continue to train and treat the puppy in the correct manner in which I saw fit.

All of the care, attention and affection I gave to Brownie had come natural to me. I was a child. And I had much more common sense than what my grandmother did at the time.

Nevertheless, my grandmother failed to accept the logic regarding the situation and not so long after our disagreement, I returned home one evening to find out that Brownie was nowhere to be found. I searched the backyard and allover the inside of my house and discovered that my mean old grandmother had given my precious puppy away.

I ran up to my bed and cried as much as a little girl could cry for the puppy I didn’t think I’d ever see again.

Later that particular evening, it just so happened that I accompanied my mother to a store two blocks away from our home and I spotted Brownie right there outside the market tied to a rail.

The person who had my puppy was inside of the store making a purchase. And as I waited outside for my mother to return, my intuition told me that that was indeed Brownie, but I still wasn’t completely sure.

Then we made eye contact and he kept staring at me and reaching toward my direction. When my mother came out of the store I told her that I was tempted to snatch Brownie back up. But we just left and went about our way.

Two to three years later I got another pet. My mother took me to get this one. We went and adopted a six to seven week old German shepherd and Collie mixed breed from North Shore Animal League. And she was gorgeous. This time no one was ever going to take my puppy away from me.

My mother came up with a name for the new puppy. She named her Brandie. And Brandie also had a very pretty coat. She was three different colors-black mixed in with tan and white.

Brandie remained with me for seventeen years before she was put to sleep. The years that we spent together were the most beautiful years of my life. We had the most special and unique bond and love for one another.

Strangers and acquaintances alike could see the love that my dog had for me. It showed in her eyes and in her body language.

Brandie was very loyal, exceptionally intelligent, protective, obedient, playful and sensitive. And when I say sensitive I mean that in more ways than one. She was extremely intuitive, she had a sixth sense, she was gifted. 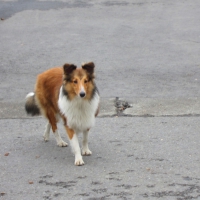 I know because I myself was born with a caul (veil) and possess the abilities of clairvoyance. There were on numerous accounts where Brandie expressed and displayed her “magic”. My dog and I were made for each other. We called Brandie a “human dog”. And she was treated just like a member of the family.

During the time I was growing up there were other puppies that were brought into the home. I had quite a lot. Most of them were given to me by neighbors. One of them I had gotten from going back to North Shore Animal league. However, none of them lingered around as long as Brandie did. I’d end up eventually giving them away to someone else.

All puppies and dogs have there own different qualities and personalities. They are all not compatible with certain people and certain other animals. Some are annoying, difficult and destructive.

With all canines it takes patience, understanding and determination. I was lucky to have found my right match. She had all of the perfect traits that I could ask for. And we complimented one another. Dogs do take after and start to favor their owners after a while of being together.

An animal knows when he or she is truly loved and cared for and they never forget how they were treated. They have feelings just as humans do and they deserve the same amount of respect. They do just as much for us as we do for them.

I cannot imagine my childhood growing up without a puppy or dog. Aside from other things life just would not have been the same.

I am so glad that I had Brandie in my life. And that I had the opportunity to home my other canines as well.